Today is the day that the adventures begin in earnest! I was very excited for this portion of the trip, as I had never before flown with Swiss, nor been to Switzerland. So, continuing on with the write-up of the trip that never was, follow along as our trip takes us to Zurich.

Upon arrival, we would have probably taken advantage of second breakfast or perhaps a shower to freshen up at the Swiss Arrivals Lounge.

Now it’s time for the main event! At the time of cancellation we hadn’t quite decided on what to do with our day in Zurich, and were toying between two main options.

I’m a bit of a train geek, and not far from Zurich is the highest rail station in Europe up on top of Jungfrau. 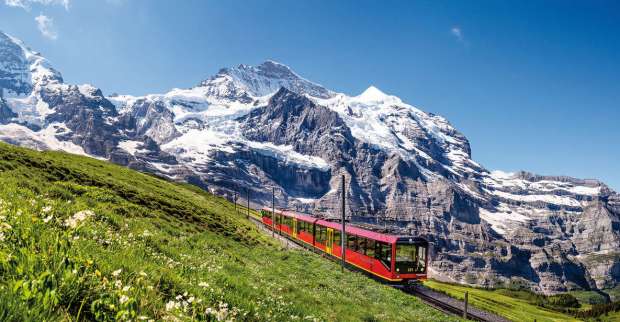 Get Your Guide: Day trip to Jungfraujoch

Jungfraujoch is also known as the “top of Europe” and the views from up there look quite incredible.

The Top of Europe

There’s a lot to see and do, like visiting the ice palace, tubing, sledging, or paying ridiculous amounts of money for a snack at the cafe or Lindt chocolate experience.

I’m sure it would have been a memorable day out.

The second option appeals even more to the train geek in me, and has the added bonus of a ride on two different kinds of gondola/cable cars, as well as a boat ride on Lake Lucerne. It is known as the “Golden Circle Route”.

A morning boat ride across the lake would get us to Alpnachstad and start the circle in the direction I prefer, though I do wonder if it would be better to have the boat at the end.

Once in Alpnachstad, we would get to ride on this beauty. The cog-wheel train here is the steepest in the world!!! And yes, I feel that necessitates at least three exclamation marks. 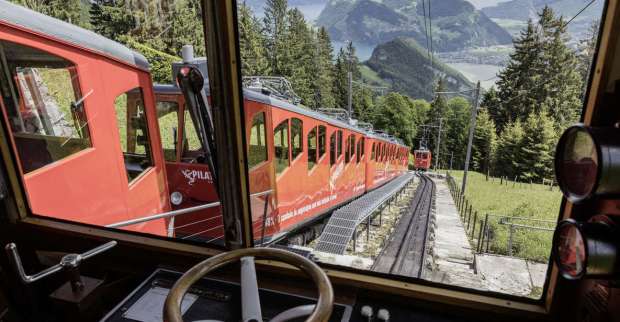 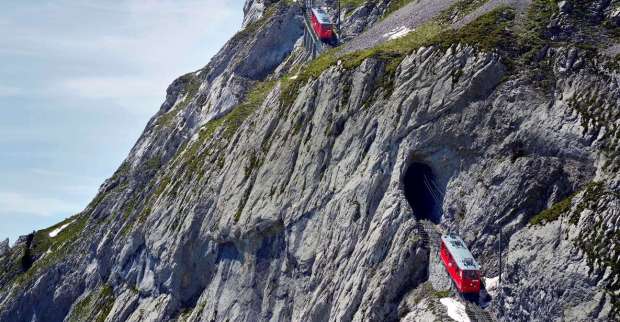 Once at the top, we could explore the Dragon Trail, check out the view, and even see it from the cafe while we eat.

View from the top of Pilatus via Roundshot

After catching the gondola down to Fräkmüntegg, comes one of my favourite activities! 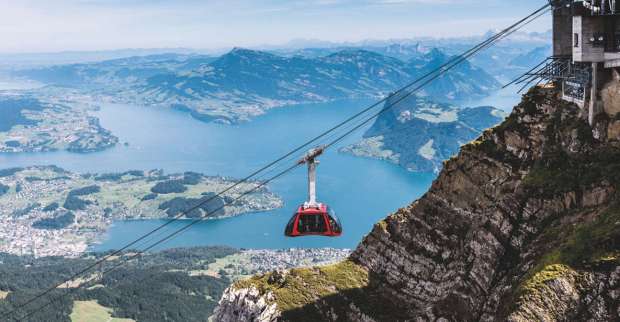 The fabulousness otherwise known as rodelbahn!! (This probably rates around 2.5 exclamation points.) It’s also called a toboggan, but I call it metallic luge.

After that thrilling ride with amazing views, we’d hop on a smaller gondola to get down the mountain and catch a bus back to Lucerne and then continue on to Zurich.

I think I’m leaning towards option 2. What would you do?

After that big adventure up whichever mountain and train journey, we’d probably be pretty tired out and hungry. I don’t think I could live with myself if I had a day in Switzerland without trying out some of the local gustatorial offerings. Namely, I want fondue, and maybe some sausages, or rosti, or raclette, and you can’t have a meal like that without washing it down with beer, and maybe following it up with some chocolate…I’d better stop there as I’m drooling on my keyboard.

I heard these guys have the best wurst, but watch out for the mustard.

Once we had our fill and were ready to call it quits, we’d finally make our way to the airport lounge to relax a bit before our next flight. There’s a relatively new lounge near the A gates, but the one near E has been described as possibly “the best business class lounge…ever seen“.

Once we had our last breath of Swiss Air (although you can buy it in a can to take with you), we’d board the same plane as yesterday, but in the main business class cabin this time. I think I’d try to reserve a vegetarian meal this round, as it’s created by Hiltl, possibly the oldest vegetarian restaurant in the world. 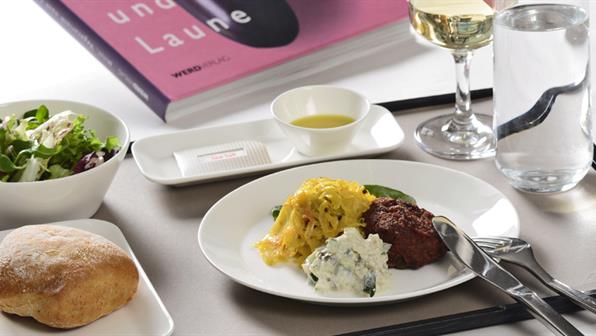 Then, if I could possibly make room for anymore, I’d have one last taste of Switzerland with a spoonful or three of Movenpick ice cream, before flattening out my bed and dreaming of muesli for breakfast.

Though it would have been a very long and tiresome day, I think I would have really made the most of a long layover in Zurich. The beauty of these flights is that the first one arrives in early morning and the next one leaves quite late in the evening. Switzerland is known to be rather expensive and this layover allows us to avoid the added cost of a hotel night.

Thankfully, the next two countries will be a little less costly, but still full of adventures. Stay tuned for Day 4 where we will arrive in Johannesburg and make our way to Namibia.

2 thoughts on “Cancelled by COVID: Day 3”